The Pirates of Penzance

You are here: Home1 / EVENTS2 / The Pirates of Penzance 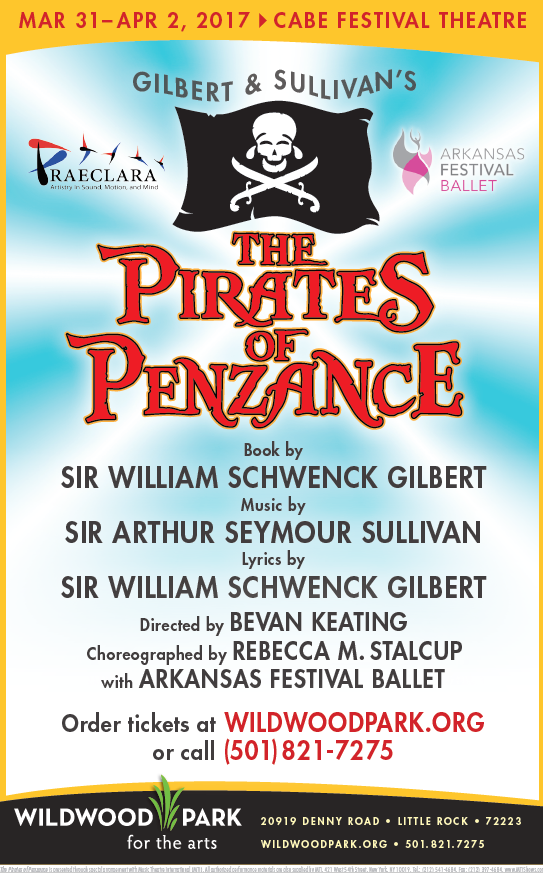 GET YOUR SEATS TODAY!

SEE OUR PRE-SHOW VIDEOS BELOW!

Before the Pirates of the Caribbean … before Captain Hook … there were the Pirates of Penzance! This delightful English comic operetta was first staged by Gilbert and Sullivan in 1879, and its witty dialogue and whimsical songs soon made it one of the duo’s most popular works.

“Pirates of Penzance” follows the adventures of young Frederic, who has lived his entire life as the sequestered apprentice to a band of pirates. On his 21st birthday, his contract frees him from bondage — and he meets the beautiful Mabel and her bevy of sisters. Frederic and Mabel soon fall in love and agree to marry.

Frederic’s pirate band wants to marry Mabel’s sisters, but Major-General Stanley, the girls’ father, does not approve. He shrewdly manipulates the pirates to rescue the girls. But the Pirate King discovers a loophole in Frederic’s contract that will prevent his departure — and so duty-bound, Frederic betrays the major-general’s deception. A merry series of mixups and confusions ensues, leading to silly pratfalls, glorious pirate duels, unexpected twists … and ultimately, a happy ending.

Praeclara presents “The Pirates of Penzance”in partnership with Wildwood Park for the Arts and Arkansas Festival Ballet. Tickets are $30 for reserved seating; $15 for students.

(Little Rock, AR)  Wildwood Park for the Arts, Praeclara, and Arkansas Festival band together for a third time, producing Gilbert & Sullivan’s The Pirates of Penzance this spring. (Previous productions include Dracula Unearthed and The Music Man.)

The Pirates of Penzance will be performed in Wildwood Park for the Arts’ Lucy Lockett Cabe Festival Theatre on Friday, March 31, at 7:30 pm and Sunday, April 2, at 3 pm. Tickets are $30; student tickets are $15 and may be purchased at wildwoodpark.org or by calling (501)821-7275.

When composer Arthur Sullivan wrote in 1879 that The Pirates of Penzance would be “a great success, for it is exquisitely funny, and the music is strikingly tuneful and catching,” he might have been begging for someone to take the wind out of his sails. In 128 years, no one has proven him wrong. Gilbert & Sullivan’s whimsical yet thrilling comic opera is a tale of romance and ridiculousness as two young lovers try to navigate a rocky coast full of softhearted swashbucklers, blundering police, and an eccentric Major-General and his bevy of lovely unwed daughters.

Bevan Keating directs the production and also conducts, sharing the orchestra pit with seven musicians. Keating serves as artistic director for Wildwood Park for the Arts and Praeclara in addition to his faculty position at UA Little Rock. Rebecca M. Stalcup is the choreographer. Bruce Rentz is the producer. The cast of 27 includes Matthew Tatus as The Pirate King, Daniel Foltz-Morrison as Major-General Stanley, Kelly Singer as his daughter, Mabel, and Luke Angelo as Frederic, the Pirate Apprentice who falls in love with her.

A farcical delight, The Pirates of Penzance is the fifth among 14 comic opera collaborations between composer Arthur Sullivan and librettist W. S. Gilbert during the late 19th century. The Mikado and H.M.S. Pinafore are also among that canon. “This production of The Pirates of Penzance mixes the vocal versatility of Praeclara with the innovative choreography of Rebecca Stalcup — always a powerful combination. The show’s lighthearted take on romance combined with the beautiful setting of Wildwood Park makes for perfect springtime fare,” says director Bevan Keating.

Synopsis of The Pirates of Penzance:

For his entire childhood, young Frederic has been apprenticed to a band of pirates, living a sequestered life among them. However, everything will change for Frederic on his 21st birthday: a day that ends his bondage to the pirates and introduces him to the lovely Mabel and her bevy of sisters.

Mabel quickly agrees to marry the smitten Frederic, and soon her sisters are also claimed by Frederic’s pirate band. The girls’ father, Major-General Stanley, does not approve. The Major-General Stanley takes advantage of the pirates’ well-known weakness to rescue his daughters.

But the escape is short-lived, for the Pirate King discovers a loophole that means Frederic is not free after all. Frederic, again duty-bound to the pirates, betrays the lie that allowed Major-General Stanley to escape with the girls. Thus begins a series of confusions, mix-ups, and humorous twists that only Queen Victoria can bring to a happy ending.

Rebecca M. Stalcup, as artistic director of Arkansas Festival Ballet, has staged the classic storybook ballets Sleeping Beauty and Coppélia, and has created original choreography for The Nutcracker, Peter and the Wolf, Peter Pan, Alice in Wonderland, Aladdin, The Adventures of Pinocchio, Snow White, and Hansel & Gretel. She has choreographed collaborative works with Praeclara including Carmina Burana, Peter Grimes, Dido and Aeneas, Dracula: Unearthed and The Music Man. Her numerous original works have earned regional recognition through the Arkansas Arts Council. Ms. Stalcup is the director of the Arkansas Academy of Dance (official school of AFB), and she serves on the executive board of directors for Regional Dance America (Southwest) and the National Society of Arts and Letters.

Wildwood Park for the Arts, home to the Lucy Lockett Cabe Festival Theatre and The Wildwood Academy of Music & the Arts, enriches the lives of Arkansans of all ages by creating community through nature and the arts. Wildwood provides opportunities for lifelong learning, engages the imagination and celebrates the human spirit through encounters with nature and a full spectrum of the cultural arts: performing, horticultural, visual, literary, culinary, the wellness arts and more. A 105-acre park, gardens and 625-seat theatre complex make Wildwood one of our state’s most valuable natural and cultural resources.

Praeclara , named for a passage from Cicero’s famous treatise on friendship, is a performing arts organization dedicated to offering unique and exemplary arts programming. Praeclara events mix elements of choral, instrumental, operatic, balletic, and theatrical performance in ways that delight the senses and stimulate the mind.

Arkansas Festival Ballet is a repertory ballet company that contributes to the cultural community in central Arkansas through quality performances featuring local and professional dancers. AFB works in partnership with Arkansas Academy of Dance to provide high-caliber training in classical ballet and modern dance with a broad range of performance opportunities.

THE PIRATES OF PENZANCE