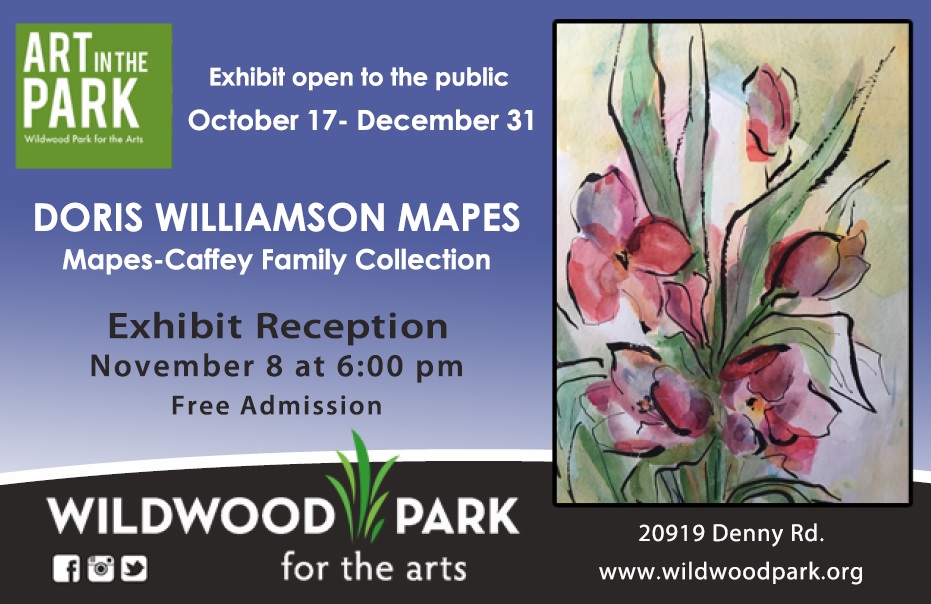 JOIN US FOR A RECEPTION

The Galleries at Wildwood

Art includes pieces from the Kay Mapes Caffey Family Collection as well as pieces for sale, including original works, prints and postcards.

Opening to the public on October 17, 2018, Wildwood Park for the Arts’ Art in the Park exhibition program welcomes a retrospective collection of art created by Doris Williamson Mapes to The Galleries at Wildwood. A Founding Member of the Mid-Southern Watercolorists, Mapes became one of Arkansas’s leading mid-twentieth-century artists. Adept in a variety of paint media, she was best known as a watercolorist who used bold, bright colors with strong patterns and abstract designs. Mapes’s style was described as imaginative realism. Memphis’s Commercial Appeal art critic Guy Northrop wrote that Mapes had a loose and airy flair. “There is a freshness to her world,” Northrop said, “and an expression of joy.”

Born in Russellville, AR, Doris’ interest in art began at an early age with her father’s regular purchase of the Denver Post at the local train station. At age eight, she submitted a pen-and-ink drawing to the newspaper’s “Artist of the Month” contest in the children’s section and won the first-place prize of ten dollars. She continued to study art throughout her youth and attended Little Rock Junior College (now the University of Arkansas at Little Rock) and Hendrix College.

Mapes also studied watercolor with John Pike and Edgar A. Whitney and completed the Rex Brandt School of Painting program in California, earning a certificate. In the 1960s, Mapes studied design and encaustic painting under Townsend Wolfe at the Arkansas Arts Center and advanced painting with Edwin Brewer in the Adrian Brewer Studio.

In 1970, Mapes, along with four other artists (Bruce R. Anderson, Josephine Graham, Edwin C. Brewer, Catherine Tharp Altvater) founded and incorporated the Mid-Southern Watercolorists (MSW) in Little Rock, AR. Mapes was elected as the organization’s founding president and served until 1972.

Over much of her long career, Mapes taught hundreds of students in art classes and workshops throughout the region. For twenty years, she taught at the Dansarts School in Little Rock, Blytheville’s Mississippi County Community College (now Arkansas Northeastern College), and the Bella Vista Fine Arts Center. Many of her students, such as Selma Blackburn, became well-known artists.

In 1991, while he was in Little Rock recuperating from surgery, U.S. Senator David Pryor telephoned Mapes to arrange private lessons for his wife, Barbara. Mapes recalled saying, “David, I teach groups. I don’t give individual lessons.” “Alright then,” Pryor replied, “I’ll come, too.” Both Pryors showed up at Mapes’s home the next day, and lessons continued until the senator returned to Washington DC. The Pryors sponsored a series of shows featuring Arkansas artists in the Russell Senate Office Building in Washington DC, and Mapes was represented in three of the shows. In January 1993, Mapes attended the inauguration of President William Jefferson Clinton; she later painted one of her best-known pieces, Man from Hope, depicting the presidential oath of office ceremony.

Thomas A. Teeter’s entry in The Encyclopedia of Arkansas (encyclopediaofarkansas.net) provided source material for this brief biography. 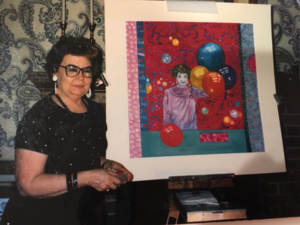 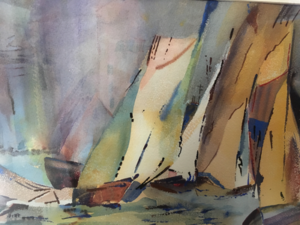 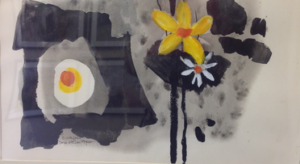 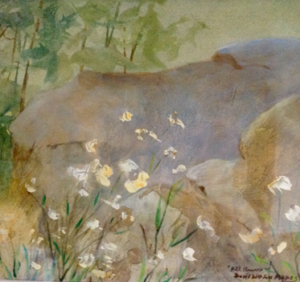