You are here: Home1 / EDUCATION2 / Art to Go! – Educational Tour

About Art to Go!

Art to Go! focuses on providing opportunities for children to experience live, professional theatre, while learning valuable life lessons. Each year Wildwood Park for the Arts takes a fully staged professional play to elementary schools across the state. Our original productions come to your school or community theatre ready to go with entertaining and distinct arts education content. A comprehensive packet of activities, worksheets, discussion topics, and evaluation forms is also provided for teachers in advance of the production. Wildwood Park for the Arts greatly depends on school feedback to inform future programming and productions. 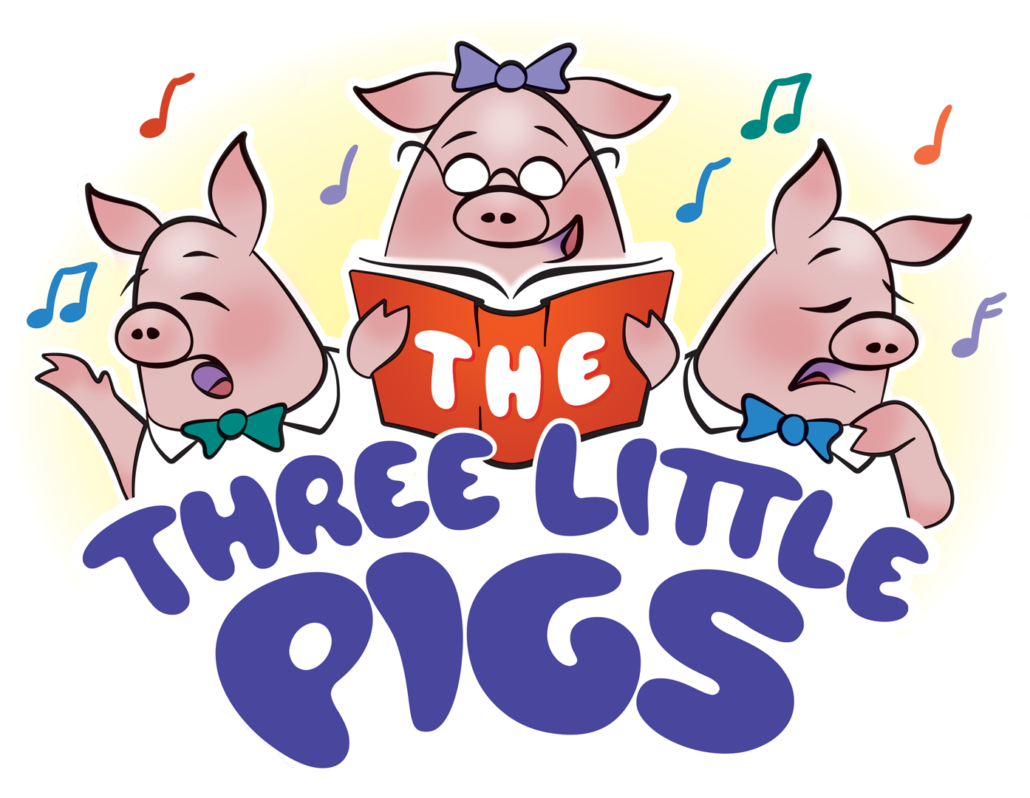 Children’s Musical Theatre based on The Three Little Pigs

An operatic version of the story of The Three Little Pigs based on scenes from operas by W. A. Mozart.

While brother pigs Don Giovanni and Cherubino set off to make homes of sticks and straw, their sister, Despina, goes to the library to read up on “huff-proof, puff-proof” home construction. After Wolfgang Bigbad blows down the boys’ flimsy homes, they run to their sister’s sturdy new brick house quite ready to admit that going to the library and reading books is a pretty smart thing to do after all.

Interested applicants for performers and technical staff should see the Audition Announcement.

Performance fees are $500 for a single 45-minute performance and a question-and-answer session with the cast following the show. The Arkansas Arts Council (AAC) may underwrite up to $200 of the performance fee for public schools, government entities or 501(c)3 organizations. The AAC funding is available on a first come, first served basis. Wildwood Park offers discounted rates for additional same-venue, same-day performances.

The production, directed by Bevan Keating, Wildwood Park’s Artistic Director, ignites the imagination while celebrating the virtues of reading and literature.  Featuring musical selections by Wolfgang Amadeus Mozart and arranged by John Davies, The Three Little Pigs is an enchanting and entertaining story for student audiences, Pre-K through 5th grade.

The Art to Go! company brings the production to rural and urban communities across Arkansas complete with scenery, sound equipment, costumes, and performers. All that is required of the venue is a 25’ by 25’ playing area.  Art to Go! will visit libraries, elementary schools, preschools, churches, and education centers with The Three Little Pigs  May 7 – May 18, 2018. Press information will be provided for local publicity of the performance. Study guides and worksheets will also be made available.

Children’s Musical Theatre based on the Brothers Grimm folktale

Follow the outcast farm animals, Dorabella the Cat, Barcarolle the Dog, Eddie Pensier the Rooster, and General Boom the Donkey as they journey the roads to Bremen to form their own band of musicians. Students in Pre-K through 5th grade will delight in the classic opera music of Offenbach, Rossini, Donizetti, and Sullivan as they learn to consider the feelings of other’s in all situations. 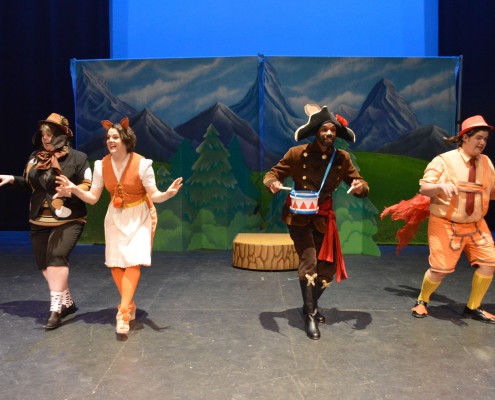 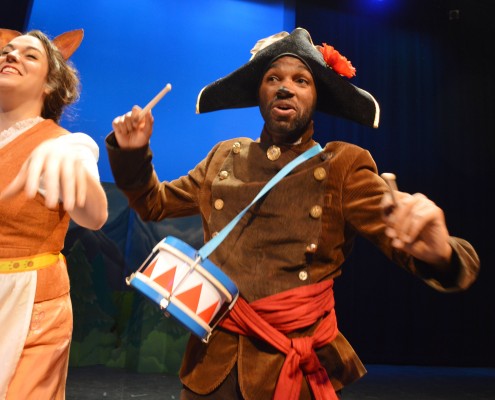 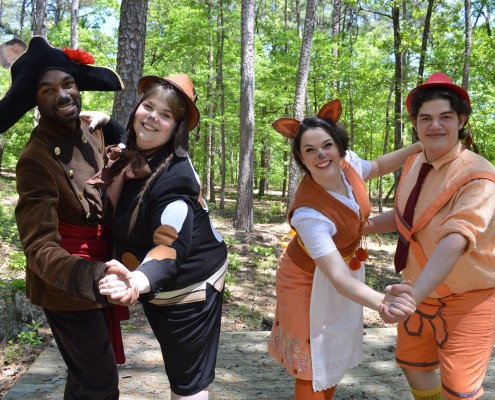 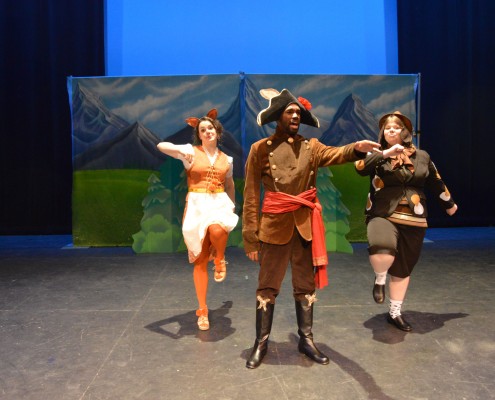 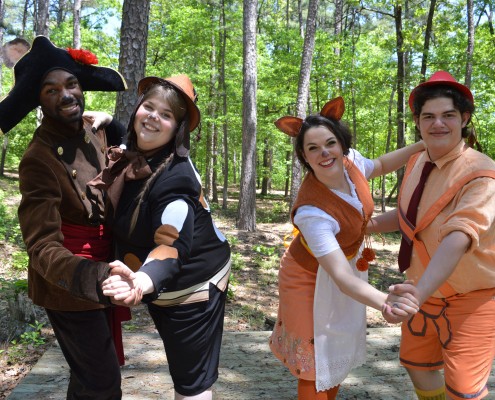 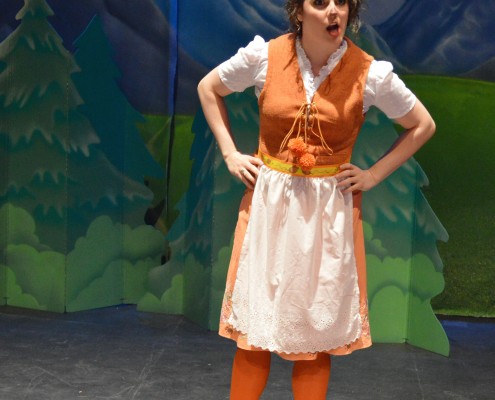 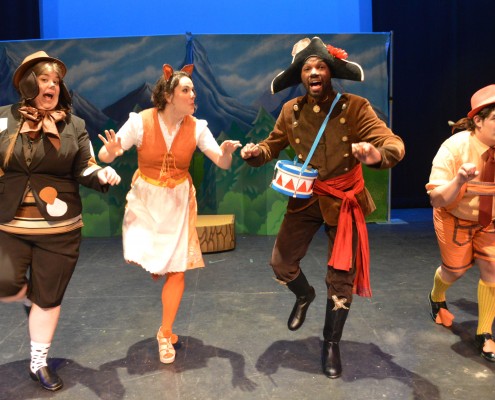 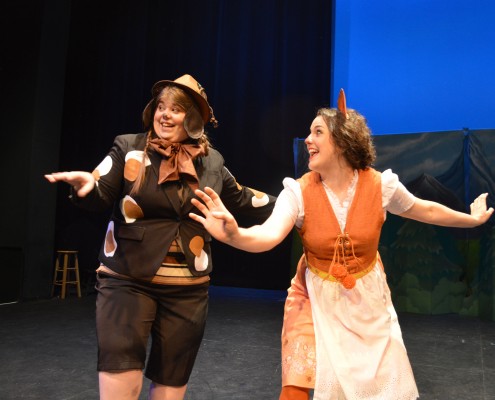 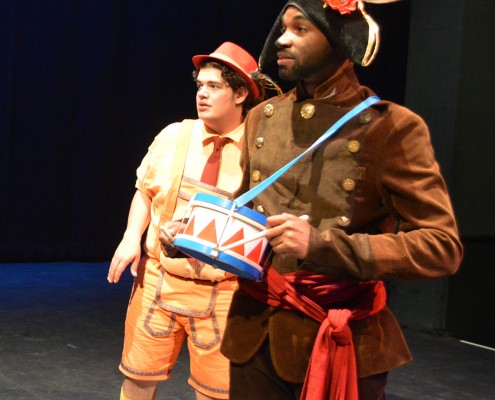 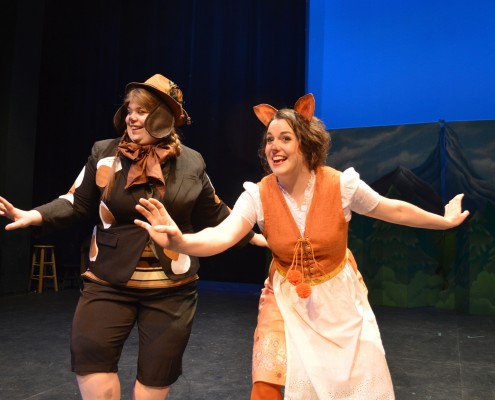 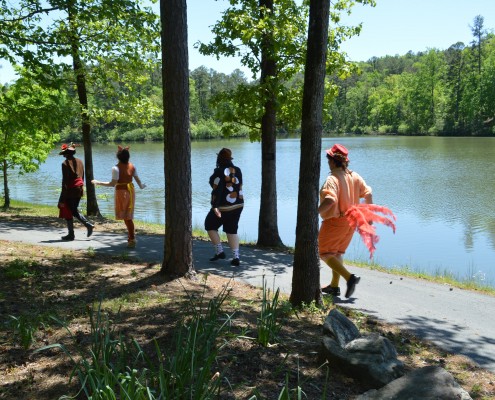 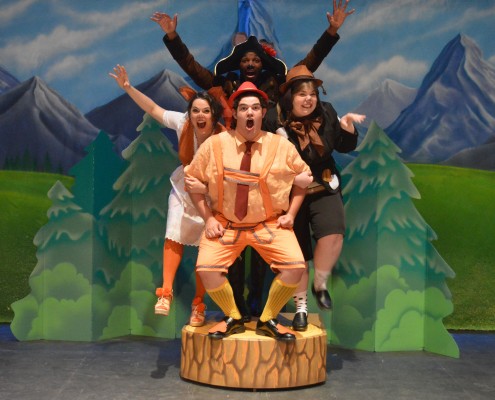 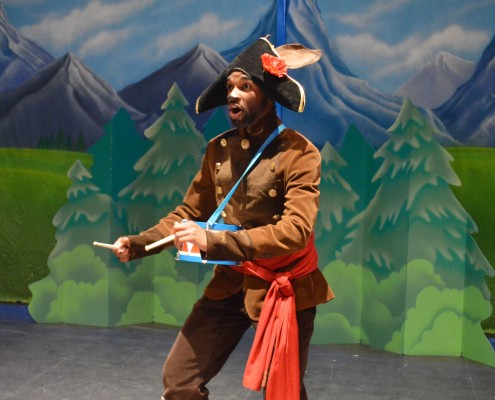 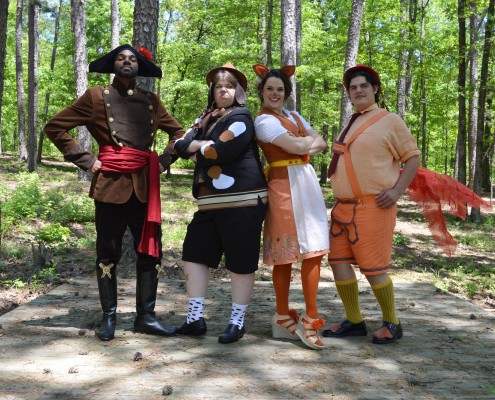 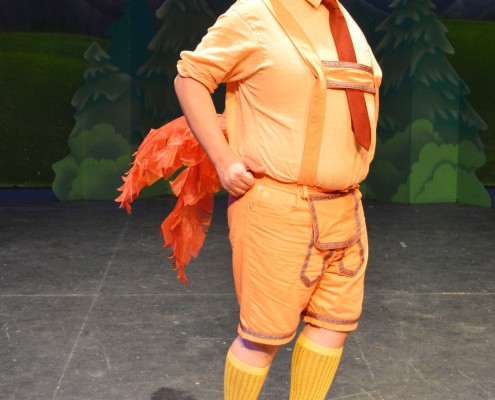 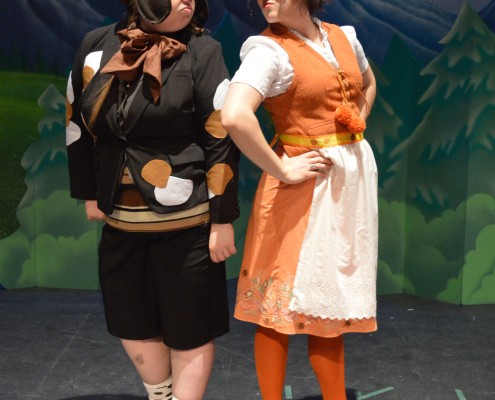 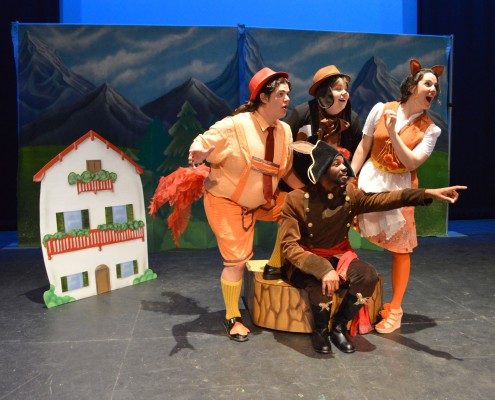 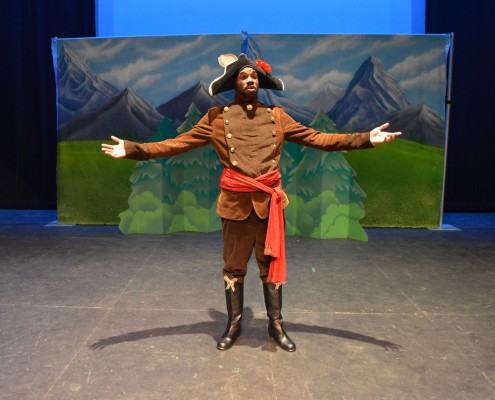 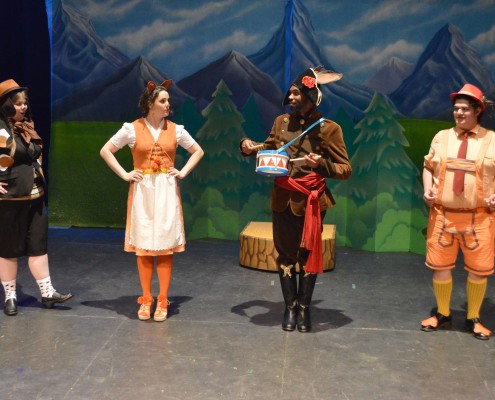 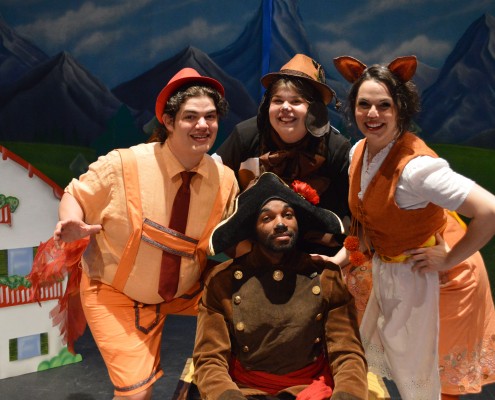 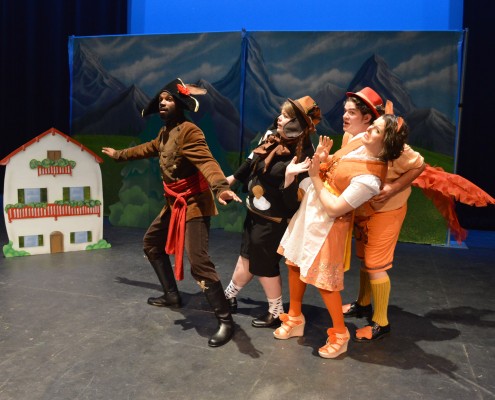 Open to the public. Donations accepted at the door. All donations benefit Wildwood’s 2016 Art to Go! Tour.

Bring your family and friends for a day out at Wildwood Park for the Arts for a public performance of The Bremen Town Musicians!

Bryan Runion, a senior Theatre Arts major at The University of Arkansas at Little Rock focusing primarily on stage management, is excited to be apart of such a great production and with so talented people.His most recent credits included: Fringe Festival 2015, The Scotland Road, The Magic Flute, The Nutcracker, Dance Harvest and Little Shop of Horrors. After he graduates from UALR, he plans to pursue an M.F.A. degree after he graduates and work more with Wildwood Park for the Arts on future productions. Some of his upcoming productions included La Bohème and Ragtime this summer.

Luke is a little rock native and has lived here his whole life. He started performing in opera at UALR in his first semester in 2008. Since then, he has played many roles in many operas, including the Witch in Hansel and Gretel, Ralph Rackstraw and Sir Joseph Porter in H.M.S. Pinafore and King Melchior in Amahl and the Night Visitors. He has also been a featured soloist in several choral works such as Orff’s Carmina Burana, Handel’s The Messiah, and Mendelssohn’s Elijah. Luke sings as a section leader at 2nd Presbyterian Church and has toured both in Canada and throughout Europe with the 2nd Pres. Adult Choir. He also currently works at eStem charter school in Little Rock as an evisor. Luke is proud to be a part of this program and tour, and has thoroughly enjoyed working with its brilliant administrators, director, stage manager and absolutely wonderful cast.

Todd McNeel Jr., Bass-Baritone, Arlington, Tx native, is a recent graduate of Ouachita Baptist University, where he earned his Bachelor of Arts degree in Mass Communications, with a minor in Speech Communications, as well as relevant course work in music and theatre performance. He studied voice under the direction of David Stanley.

Mr. McNeel is a classically trained vocalist, recognized for his musical versatility, performing in genres such as Jazz, Musical Theatre, Gospel, and American Popular music.

While at Ouachita, Mr.McNeel performed the roles of The Mikado: Emperor of Japan in Gilbert and Sullivan’s “The Mikado”, Frogg in Strauss’ “Die Fledermaus”, Principle Dancer in “Hello Dolly” , as well as an ensemble member in Mozart’s “Die Zauberflote.”

Knowing the importance of being a well rounded professional, Mr. McNeel specializes in Marketing and Arts Administration, combining his love of advertising and performing.

In the Fall of 2015, Mr. McNeel plans to attend Longy School of Music in Cambridge, Massachusetts to receive a Graduate Studies Diploma in Opera Performance and hold an assistantship in their Marketing and Communications department.

Caitlin Secrest, a native of Arkadelphia, AR, is a vibrant and spirited young soprano who has had abounding success in many areas of performance. Secrest is trained primarily in the classical and operatic genres, but is equally versed in musical theatre and popular music. Most recently, Secrest was seen in the saloon at Silver Dollar City, performing the zany role of Tilly in SDC’s Christmas production, Fa La La La Follies. Previous to that, she participated in her second season at Opera in the Ozarks, performing the role of Despina in Così fan tutte (2014) and Giannetta in L’elisir d’amore (2013.) Other operatic credits include Gretel in Hansel and Gretel, Pamina in The Magic Flute, and Zerlina in Don Giovanni, while musical theatre credits include Adelaide in Guys and Dolls, Irene Molloy in Hello, Dolly!, and Kitty in The Drowsy Chaperone.

Secrest’s performances have brought about attention in the realms of competition, as well. Last summer, she was a finalist in the national NATS Music Theatre competition. She has also been a two-time finalist in the Trinity Presents Collegiate Showcase, the state winner in the NFMC Women’s Voice competition, and an honorable mention in the Hal Leonard Musical Theatre Vocal Competition, along with many other awards presented to her throughout her college years. Secrest earned a Bachelor of Music in Vocal Performance from Ouachita Baptist University, and studied voice under Drs. Glenda and Jon Secrest.

Upon completion of her tour with Wildwood Park’s Bremen Town Musicians, Secrest will be headed to Missoula, Montana to train for a yearlong tour of the United States with Missoula Children’s Theatre. Secrest is very excited to continue this experience of sharing music and theatre with young people, and being constantly reminded to live, love, and cherish all things with the heart of a child.

Georgeanne Yehling, soprano, hails from Little Rock, Arkansas. She holds a Bachelor of Music degree in Vocal Performance from Oklahoma City University, where she studied with Larry Wade Keller and coached with Chuck Koslowske.
While at Oklahoma City University, full operatic roles included Mother Marie in Dialogues of the Carmelites, Gertrude Stein in Mother of Us All, and Maurya in Riders to the Sea. Musical theater roles included Jack’s Mother in Into the Woods, Enid Hoopes in Legally Blonde, Queen Constantina in Cinderella, and Mrs. Merkle in Bye Bye Birdie. She is a 2014 Encouragement Award Winner for the Arkansas District of the Metropolitan Opera National Council Auditions.

In the fall of 2015, Georgeanne will be pursuing her graduate degree in Opera Performance at Wichita State University, where she will act as the soprano graduate assistant in voice.

Georgeanne currently studies voice with soprano Christine Donahue, writes about her trials and tribulations as a “southern-fried soprano” at southernfriedsoprano.com, and is a lifetime Girl Scout.

Use the following tools to announce your performance to your local media outlets and to supplement your student’s classroom experience both before and after the performance.

Performance fees are $500 for a single 45-minute performance and a question-and-answer session with the cast following the show. Press information will be provided for local publicity of the performance. Study guides and worksheets will also be made available.