You are here: Home1 / ART2 / Cloth as Community: Hmong Textiles in America 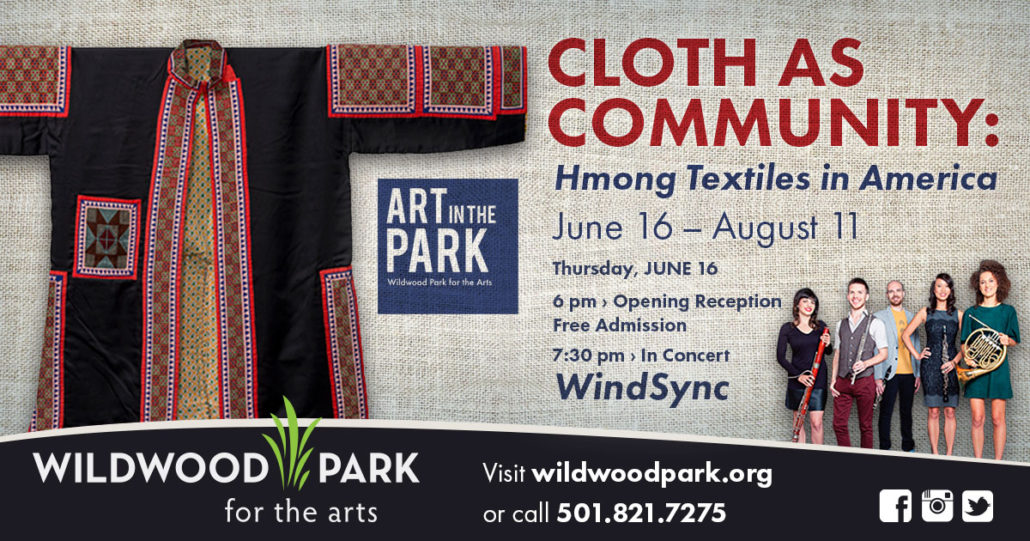 Hmong flower cloth (or paj ntaub) is one of the world’s great textile traditions and an excellent example of cloth as community. Despite its deep roots in Hmong culture, this complex art was not widely known outside Asia until after the Vietnam War, when Hmong refugees arrive in the United States. The works illustrate the profound relevance of textiles as infrastructure in the Hmong culture, an art form that shifted as it adapted to fit new realities. The exhibition features 28 textiles—flower cloths and embroidered story clothes—by those in the Hmong community.

The exhibit Cloth as Community: Hmong Textiles in America will open to the public on Thursday, June 16 and will continue through Thursday, August 11. There is no fee to visit the exhibit. Art may be viewed weekdays between 10 am and 4 pm, and on Saturdays and Sundays from Noon to 4 pm.

The reception is free. 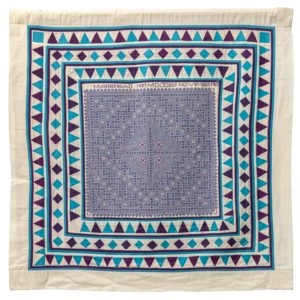 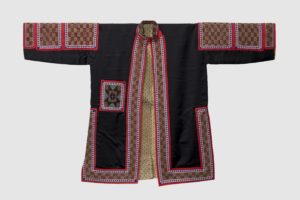 The story of Hmong textile production reflects the shift in the creation of textiles with traditional abstract patterns created for family and ceremonial use to its evolution as a source of commerce and telling of a new life abroad. The works also reveal the radical upheaval Hmong refugees experienced, as many crossed the Mekong River to Thailand. Hmong women traditionally produced complex clothing that established clan identity through abstract geometric designs, created by embroidery, appliqué, reverse appliqué, and indigo batik. These patterns continue to influence the aesthetic choices of contemporary makers, even as those choices were mediated by refugee experience and economic concerns. Historically, textiles in village life were not sold but they held important spiritual protections. In refugee camps and beyond, the sale of textiles generated important income for families, and this creation of textiles for commerce brought on changes to this centuries-old art form. Story cloths emerged with pictorial art, sometimes sharing escape narratives of those in refugee camps.

As the memory of the Vietnam War receded and American buyers required more upbeat subjects, many of the story cloth subjects morphed into representations of a new life in America or nostalgia for the pastoral life left behind (animals in a jungle, scenes of village life, or illustrated Hmong folk tales with English text). The works in this exhibition demonstrate a period in time when old paj ntaub influenced new designs, often produced at a larger scale or with more space devoted to the triangular borders, and embroidered story cloths changed to fit a new market that was different from tourists  or relief workers in the camps. The works show how the profound relevance of textiles as infrastructure in the Hmong social fabric has never been part of a fixed cultural tableau, even as the narrative is adapted to fit new realities.

Organized and toured by ExhibitsUSA, a national part of Mid-America Arts Alliance, the exhibition was first curated in 1999 by Carl Magnuson, a cultural anthropologist, working with a Hmong refugee community. Curatorial updates have been done by Geraldine Craig, who has published more than a hundred essays on contemporary art and Hmong textiles, in venues such as the Hmong Studies Journal, The Journal of Modern Craft, Art in America, and Surface Design Journal. Craig is currently department head of art at Kansas State University, and previously served for six years as Assistant Director for Academic Programs at Cranbrook Academy of Art. ExhibitsUSA sends more than 25 exhibitions on tour to more than 100 small- and mid-sized communities every year. Based in Kansas City, Missouri, Mid-America is the oldest nonprofit regional arts organization in the United States. More information is available at www.maaa.org and www.eusa.org.

A Program of ExhibitsUSA, a national division of Mid-America Arts Alliance with The Arkansas Arts Council and the The National Endowment for the Arts.